Artisans in Residence
Every now and then CABINET invites les artisans et les artistes du quartier to present their work.

Join us for the ARTIST TALK between Erik Yaeger and Pieter Van Bogaert on Saturday Nov 22 at 4 pm. The conversation will be in English. Please confirm your presence: ann@amarona.be

Call Erik Yaeger a replaced person. Not displaced, not out of place, but replaced: always in another place.
To read his name in German, would make him a hunter. But he is actually American, born in Ohio with its sharp seasons, and raised in California with no seasons, before he moved to Europe with its slow seasons. He lived in Paris but now he lives in Brussels since many years.
You may know him as a musician. He was a member of the legendary post-industrial band Von Magnet. You can still see him at work as singer and keyboard player of Negative Stencil. Or you may have heard his music as DJ Y.Me on Friday nights at café Walvis.
Yaeger, among other things, also paints. That’s what he learned at art school in San Francisco and Seattle. It is the most visible but maybe the least known part of his creative output. 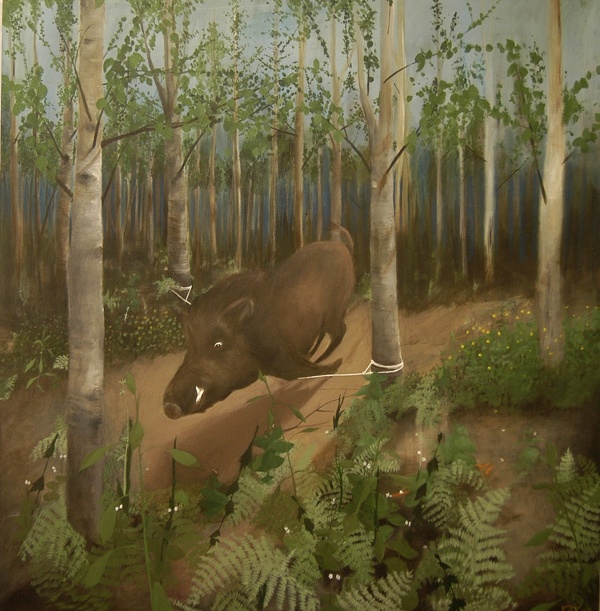 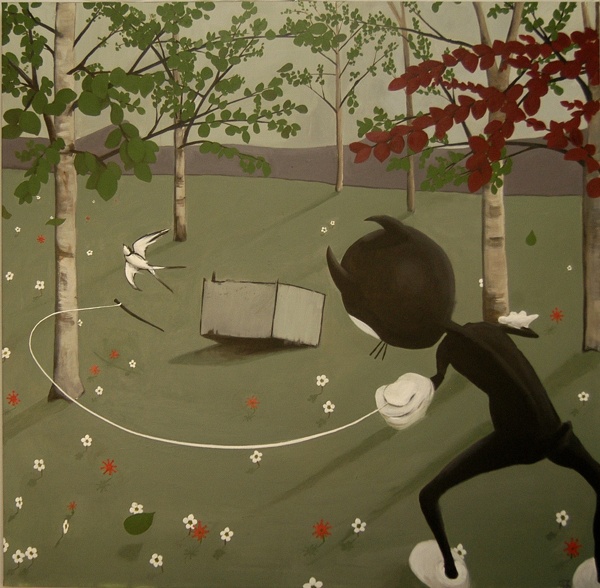 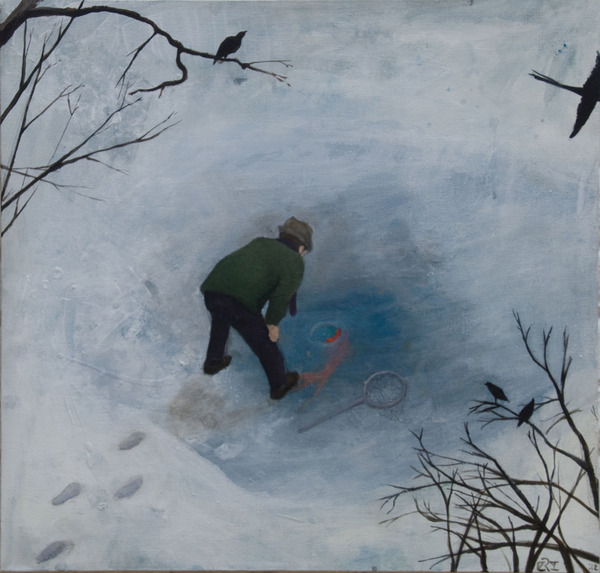 The trees, seasons and things in the title of this exhibition are the self replacing patterns in these paintings. They appear with or without leaves, with or without sun, black as the night or white as winter. They reappear as the hunting season (Yaeger obliged) or as the harvest season (to present the harvest: isn’t that what this exhibition is about?).
These patterns come as a game. The hunt is not to be taken too seriously: an athletic wild boar stumbles at the finish line (‘Trippy’, 2005). A sophisticated cat catches birds with a box and a rope (‘Catchy’, 2008). A fisherman tries to capture a fish through a hole in the ice with a net too big to pass the hole (‘Capture’, 2012).
The game itself comes as a pattern in these paintings. It is an unstable system (the bowling pins on the table in ‘Risky’, 2009). It features adults playing with fire (‘Craft’, 2000) or a child playing with an unknown object (the disappearing hand of the girl in ‘Fishy’, 2007). Here the paintings get something perverse, obscene, but not really. What’s in the frame is as important as what’s kept outside. 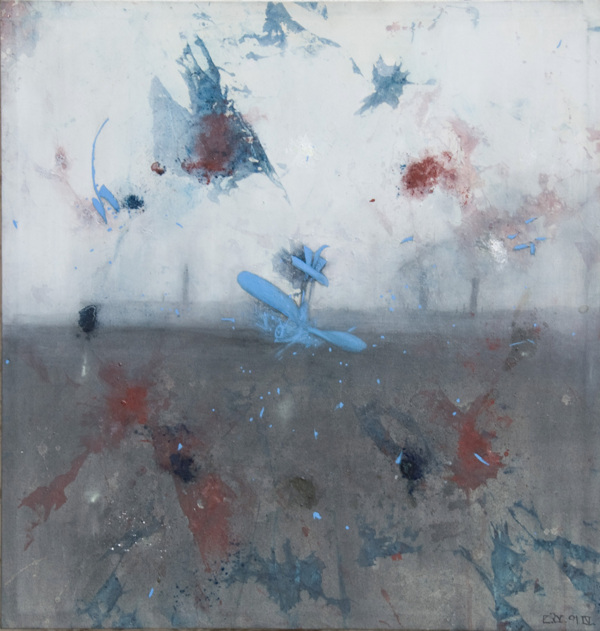 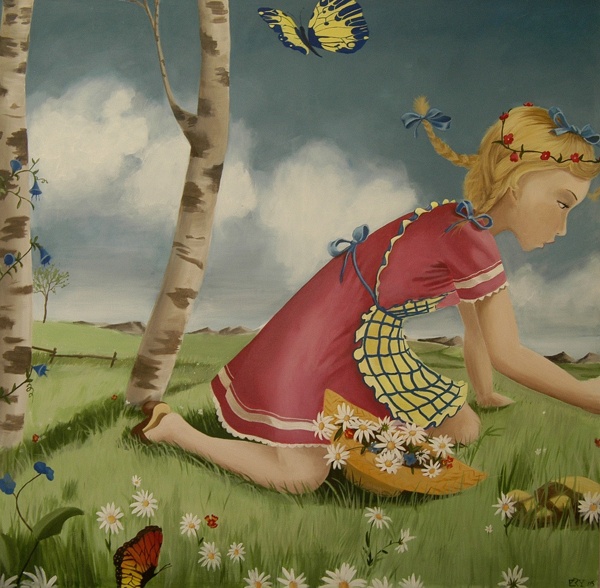 Maybe the frame is the real subject of this exhibition in which no frame is to be seen (except of course the empty frames on the wall of Cabinet). What you see are canvases on their stretcher frames. The frame itself always remains unseen. But still it plays an important role. Yaeger doesn’t make it, he doesn’t paint it either, but he makes very good use of it. Many things happen at the edge of the image, some things fall out of the picture.
In his C-series (and what else is a series than a frame that holds different paintings together, a context that frames the work? It could be C for Cabinet), the traditional frame is simply impossible, because the painter paints deliberately over the edges. The frame runs through, unlimited, undisturbed. The subject is placed right in the middle of each painting, surrounded by ever expanding space. Sometimes things appear in the darkness: a bear with balloons as an unexpected spectator of the burning house (‘Cub’, 2013). Sometimes it is a pattern, as an endless wallpaper around a couple of milk buckets (‘Cup’, 1999). If you look well, you can see the twelve stars of the European flag appearing (or disappearing) in the chaos around the crashing plane (‘Craft’, 2000). 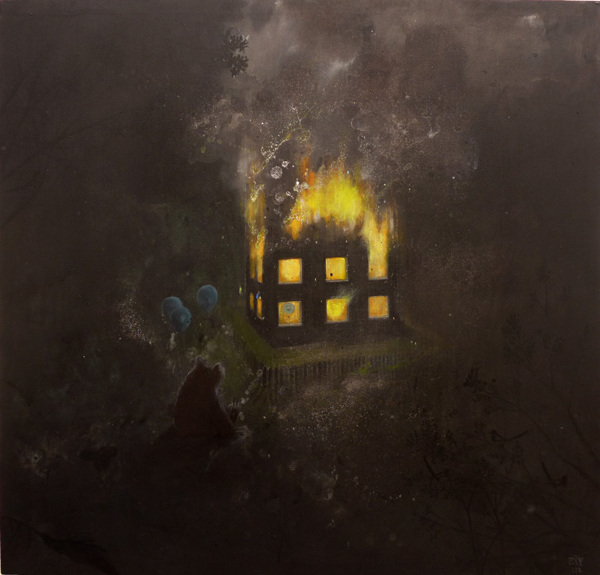 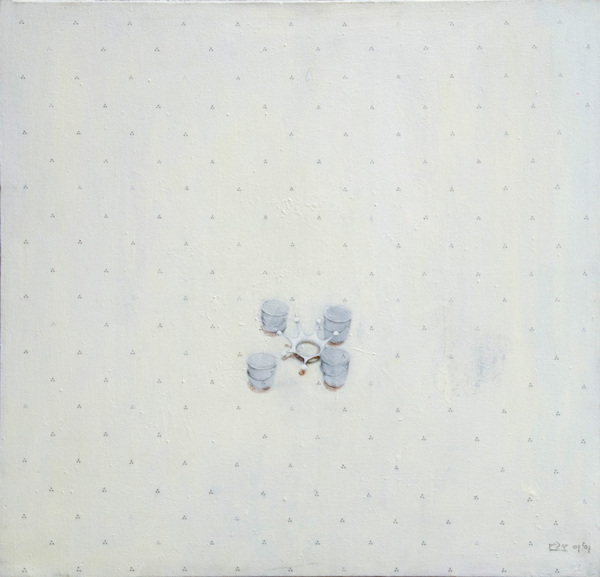 You probably noticed that all these canvases are square, no matter the size. It is the most simple frame to come up with, but the most difficult to fill in. Always caught between two stools: between the horizontal rectangle of the landscape format and the vertical of the portrait. It is the same format of the first film frames: plain square, rapidly changed in a rectangle for technical, but also aesthetic purposes. We had to wait for video art to put the horizontal rectangle of the film frame on its vertical side and for smart phones to combine both. These square paintings are in between. Each of these works has something of a primitive film still. Of a video game also. They’re smart, but above all, happy accidents.
This exhibition is such a happy accident. These paintings are not framed by a gallery, nor by a shop, but still they can be looked at and bought. They are presented in a workshop (remember: with the C of Cabinet), hence it will be a working exhibition: a rotating exhibition in which new and older paintings will appear and disappear. Expect the unexpected in this game with no rules and (for the time being) no frames.
(pvb)